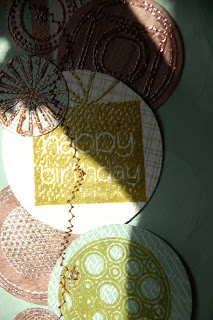 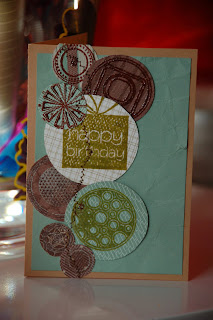 My FIL's birthday was at the end of February. We just got back from spending a weekend in PA to visit and celebrate both his and my son's birthday. We had a great weekend and the trip was thankfully easy on both ends.

I totally CASEd this card from a magazine that is presently up in my office. I'll get it and reference it later.

I changed the overall materials, color scheme, etc but the design is the same.

I used my Cricut to cut circles in various sizes. I stamped and heat embossed the circles for added dimension. I then laid them out and gently tacked them down. I used my sewing machine and zipped a line of stitching down the middle. The entire thing was gently distressed. I really love how it came out!!
Posted by CraftyMomOf3 at 1:12 PM 2 comments: 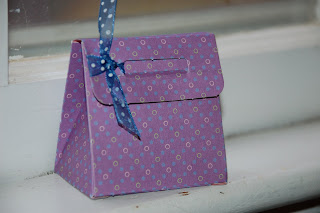 My friend Erica's birthday was last month and between our schedules we'd gone WAY too long with out seeing each other!! Thankfully she came over yesterday afternoon and stayed for the evening!! It was SO fabulous to have her here, playing with the kids, chatting away, and hanging out. Erica and I have been friends since the first grade. We've both been to hell and back together and in our own lives but we've both come out on the other side and now we laugh about it all.

So I wanted to do something extra special for her card. I had this cute little die cut box out of a pack that I picked up at Target. It measures 2 1/2 x 2 1/2. I decided rather than put something like candy inside that I'd make the box the actual envelope. I love doing small cards because well...a) they dont take too long and b) they are not as intimidating as larger cards can be and c) they are SO cute!!!

So I pulled my color pallette mainly from the inside and outside of the box. I started cutting and then was looking around at my embellishment collection and found a small ring binder so I decided to do a multi-page card to keep it interesting.

I don't have time to go into the brand details but I had SO much fun doing this and it only took me about...40 min or so. And I was thrilled with how it came out. And my friend Erica loved it too!!! 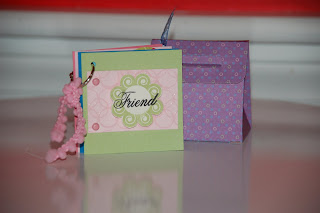 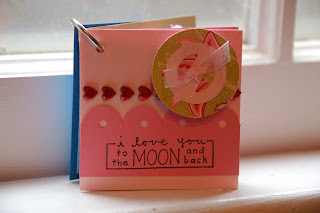 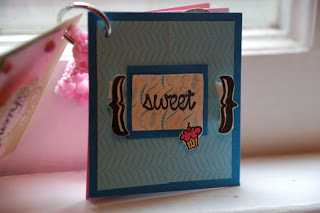 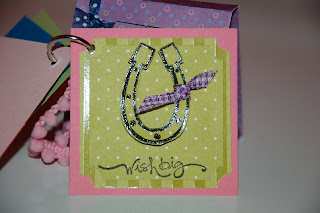 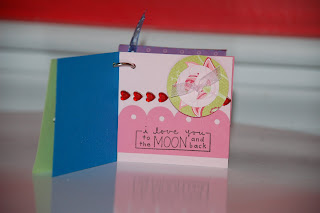 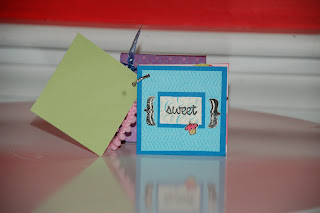 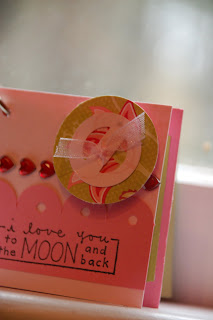 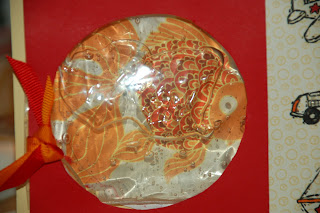 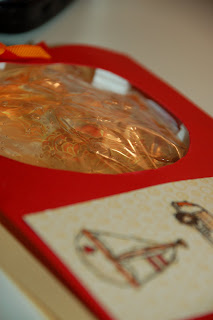 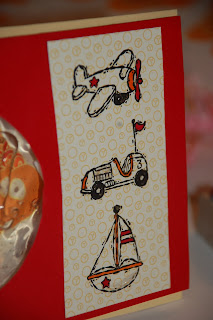 My darling son turned 3 this past Sunday. Poor kid has been sick on each birthday he's had thus far so my fingers were crossed that everyone was healthy!! We had it at a place called Noodle, Noggin and Bean. It is an interactive playspace with many different activities. In one room they have basketball hoops and climbing structures, another room has art supplies all set up, one room has a giant wooden train and firetruck for the kids to climb on, there's a music room, a spaceship, a pirate ship with a large water table complete with fishing poles and magnetic fish. One room is a diner/kitchen, there's a doctor's office and a room with golfballs, pipes, levers and pulleys to arrange and rearrange to make different mazes for the balls to fall through.

The party was smashing. All I had to do was bring the food!

I wanted to make him a special card with all of the things that I know he loves. Fish...being the primary. And any kind of transportation vehicle is also number one in this house!!

I can't take credit for this card idea as I found it while parusing Nicole's blog which I do often for inspiration. I didn't do the same design she did but just used the general idea for inspiration. I think I used a tad too much hair gel so I'll remember for next time not to use as much.

He loved his card and loves playing with the "fish"! LOL! Such a cutie.

I hope you're all having a great start to your week! 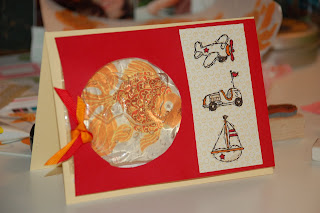 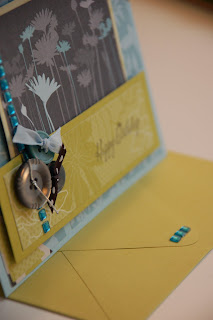 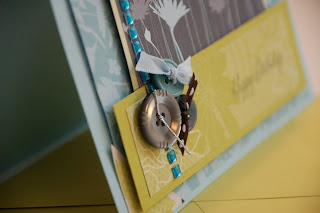 For those of you who know The Doctah...you need no explanation.

For those of you who don't...let me give you a 2 word description of her...

In every sense of the word. She's uppity, pushy, demanding, insulting, sometimes mean, judgemental (even tho she claims she's not!), and difficult.

She's also concerned, loving, generous to a fault and very funny - even though most of the time she doesn't know it!

Her birthday is in February and we're (my hubby, kids and I) are going to visit her on Sunday at the Cape. She loves my cards but really doesn't appreciate all that goes into them. So I kept it kind of simple.

As insane as she can make me sometimes...I love her dearly and cherish the relationship that I have with her. 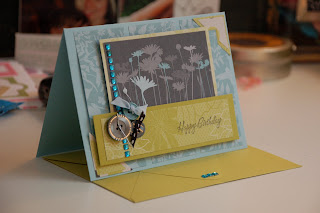 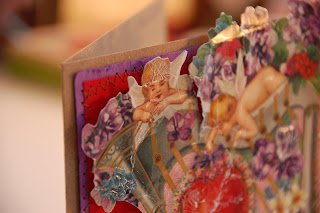 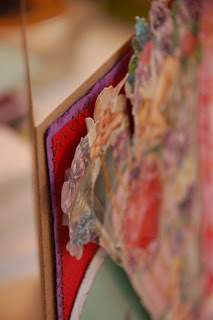 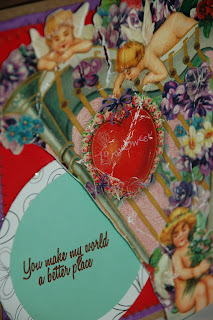 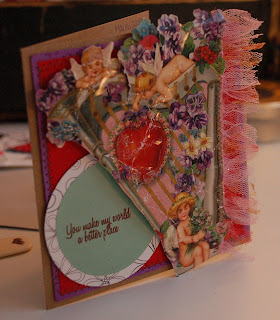 This card is for a very special person for whom I am very grateful to know.

Now that I'm finally back in the groove I am catching up on my list of card making for people in my life "just because".

The fall and the holidays were so busy that I was just filling orders! I'm not complaining but it leaves no time for just fun creative time. So now I'm trying to take advantage!!

As you can see I FINALLY busted out my sewing machine from the depths of my basement. It is such an easy way to add detail to a card or project!

The main image was cut from a card that I bought in a pack at Homegoods. The images are kind of Valentine-esque but with a cool vintage flair. The entire card in and of itself was way overload (I bought the pack for the images...not so much for the fact that they were cards) so I cut my favorite section out. I crumpled it up, twisted it around and back again to distress it so it really looked vintage. I used my Crackle accents on a few spots to add some depth. I purchased the fluffy trim at JoAnn Fabrics. I first used my adhesive runner to position the trim properly and then I sewed it in place. The purple and red mattes were also crumpled and smooshed up to have that distressed look. I also stitched around the edges of those to add continuity.

I used my Cricut to cut circles to add my sentiment (from PTI) and I used craft ink, embossing powder, and my heat gun to give the sentiment a polished look.

I added a bunch of pictures in this card and sent it off yesterday!!! I can't wait until it arrives!!
Posted by CraftyMomOf3 at 12:30 PM No comments: 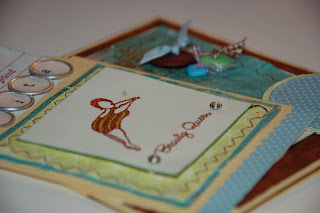 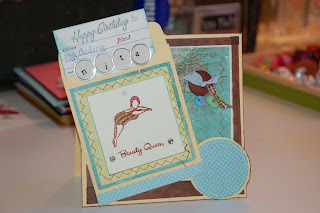 It's amazing how taking 3 months off can really spark your creativity!! Here is a card that I made for my darling friend Nita for her birthday.

I bought the library style pocket and card in a pack from Ink All About It almost a year ago. I've just been waiting to use them and inspiration hit me on this! The card pulls out with a message written on it and I enclosed a gift card in the pocket as well.

(pay no attention to that shadowy dot right about my bathing beauty's head...something is up with my camera. it's not really on the card)

I hope that everyone has a great Friday!!
Posted by CraftyMomOf3 at 7:24 AM No comments: 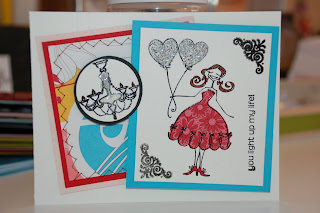 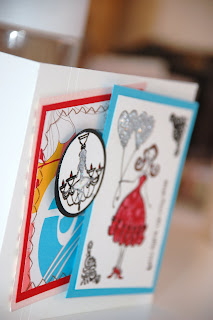 I cannot believe it's been 3+ months since I've posted. I've just been...busy I guess. It's amazing how fast the time goes by.

But anyway...I'm back into the swing and have something new to post!!

This is for a fabulous friend of mine whose birthday is coming up soon!! I can't wait to celebrate with her!!

I hope that everyone has had a great winter season!! I know spring is right around the corner!! (hopefully!)
Posted by CraftyMomOf3 at 11:02 AM 6 comments: