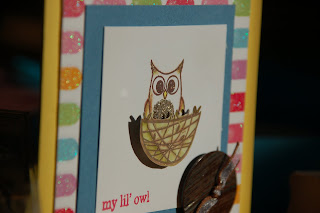 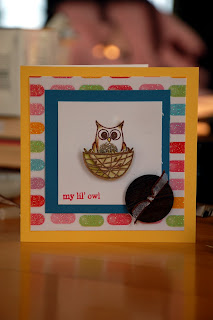 I was "gone" so long that I barely noticed that my DOMAIN had expired!!! HAHAHAHA!!! I swear...I don't know how you all do it...posting almost every day...It's exhausting and inspiring all at the same time!!!

In April my husband, kids, 2 dogs and I went to Maine for a week of R&R. It was a week of serious family time. I started a new tradition of making cards for my children. Really cool cards that they'd love. And putting in messages that were meaningful to them that even at their young ages of 3 and 4 they could understand. I let them hang onto them for the time in Maine and then when we packed up to come home I put them boxes for each child to give to them when they are old enough to care for them properly. I'm hoping that each child's box will be a treasure for them for life. There's no rhyme or reason to when or why they get a card. I just want them to come as a surprise every time...just because they are who they are and because I love them.

So I'll start with the first card I made for my daughter Kendall. She is a true nature and animal lover. Just yesterday she had about 30 gypsy moth caterpillars in her small wheel barrow with tons of leaves and regardless of the fact that we had the atv (child version) all charged up and the giant bouncy slide inflated she kept running to the wheel barrow to ensure that the caterpillars were safe, fed and well cared for!! She also loves rainbows and sparkles...what little girl doesn't??

So with that said...this is the card that I made for her!

I used my Amuse pre-cut/pre-scored sunny yellow cards that I've seriously had for a YEAR!! I love to hoarde stuff so I was busting out of my comfort zone by using these finally. I next grabbed the most glittery and rainbow"y" designer paper that I had from one of those Mat Stacks, the next matte was in her favorite color - blue - followed by some basic white cardstock. The owl is from one of my favorite PTI sets Wise Old Owl. Also...had for a year and had NEVER been inked!!! FOR SHAME FOR SHAME!!

I used my Copic markers in various shades of brown, green and clear (blender) to give some color and life to Mr. Owl. I also snazzed his belly up with some antique real glass glitter - which I think has THE best shine because it is made from real glass so it definitely reflects the light differently than regular "plastic" glitter. (or whatever most glitter is made from) I have this adorable Amuse stamp that I recently got at Colorful Creations (along with the antique glass glitter) in Hyannis during a girl's weekend. I used my Copics as well as a Sakura gel glitter pen to color in the nest. I adhered it with pop up foam to give it some dimension. The sentiment "my lil' owl" is also from the PTI set. The button is an extra from a sweater from years ago that I'd thrown in with my craft stuff and I loved the wood grain look of it. Considering my daughter's love of nature it fit in perfectly. I used a bit of ribbon to compliment the button and then adhered it with a glue dot. The sentiment on the inside simply says "i love you".

And I wrote a personal message to her and had it waiting for her at the breakfast table in the morning. She LOVED it!!! It's not terribly hard to please her but I knew that by the look on her fact that she really appreciated it and she carried it around with her for the rest of the week.

I hope that everyone is having a fantastic start to the summer!!!

I'll be back soon with more!!

Welcome back, Meredith! Missed you! These cards are great. And what a nice idea to do for your kids. Love it. Hope to see you soon!