so i made a bunch of father's day cards for my dad, for other people to give to their dads...but i didn't want to give my husband the same card that he'd seen me make for others. so i parused...and i parused...and I saw a lot of cards regaling dads as heros. so i was inspired and went to my "studio" (that's what i now call my crafting area in my dark, spider filled basement...but it's all mine and it is where i become inspired so it is in effect my "studio") but i digress...

my husband is in every sense of the word my hero. it's too much and too personal to really get into on this light hearted crafty medium i have going on here but those of you who really know me, my upbringing and my personality...know what i'm talking about.

we've been together coming up on 16 years next month (the anniversary of our first date is July 15th) and i don't regret one second of our time spent together. besides the fact that if we didn't want to we wouldn't have to talk or give direction to the other because the other one knows...and we're never wrong. if he has to make a decision in my absence or me for him...its always right...always. we know how the other one thinks, what they'd say, what they'd do and how they'd react. sentences are finished by one another, moods are detected before they even surface. we can bicker and be done in 5 minutes and laughing about it.

he's my hero and has been now for almost half my life....i love him with every fiber of my being and then some...he's the BEST husband and friend i could ask for...and he's by far the BEST dad in the world...

i could go on and on but what you all really want to see is the card, right??? hehehe...

ok well here it is! 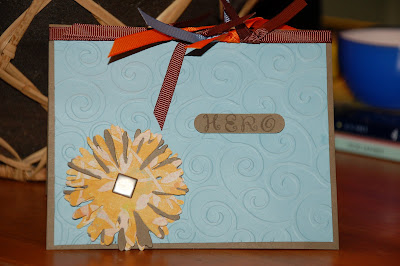 sooo sweet my fingers stuck to the card :)

he's a hero alright. you should totally keep him!