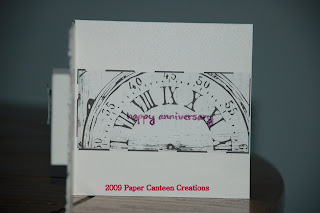 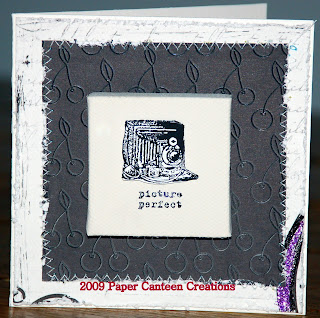 I waited to post this as I had sent it to 2 darling friends who just celebrated their 9th wedding anniversary!!! I *try* to remember all of my friends anniversaries but it's hard...and sometimes the date slips by and you realize it two weeks late!! But not this time!!

I had it on my handy "birthday calendar" that hangs now in my "office nook" in my newly remodeled kitchen!

I started with this TINY artists canvas that is 2"x 2". Seriously? It was just the cutest. I coated it with white acrylic paint just so that the canvas wasn't completely bare and set it aside to dry. I grabbed some PTI white cardstock as it is the heaviest around (knowing that the front of the card was going to need some strength even to hold the small canvas). I grabbed this fantastic black and white DP (I can't for the life of me remember who makes it right now) but it appears to be sketched and not printed...which I love. I seriously distressed this first layer with my Tim Holtz distressing tool WHICH I COVET!! And believe me...they are hard to find in stores!!! Gotta order those babies online...but I digress...I then used SU! paper (again....I'm forgetting the name) but the black paper with black embossed cherries is from SU!. I pulled up to my sewing machine and set to work zig zag stitching all around this. I used my Sakura glue pen to color in a tiny section on the initial layer and then used my Making Memories scrapbook shimmer glitter in purple (their wedding colors). I also used the same paper as the first layer as my interior section to stamp the 'happy anniversary' sentiment (from MFT). Embossed and heat set with Colorbox craft in in eggplant. The final touch was to add my sentiment on the outside with SU!'s Puns From The Past Set. I stamped it first in black staz-on on the canvas and then again on SU! shimmery white. I trimmed it out and added it on top of the first stamped layer just to add some dimension to it. The sentiment is 'picture perfect' as I've always viewed this couple.

Since it was WAY too dimensional to fit into an envelope I put it in a little acrylic box and brought it to my local postal store and mailed it out.

It was a big hit and my friends had a wonderful 9th anniversary!!

I hope everyone is having a creative *almost* end to summer!!