It's no huge secret that I am a Tiddly Inks ADDICT!! I love love loveeeeeee TI!!! I need a bumper sticker...seriously!

But I digress...this week's challenge is RIGHT up my alley!! Going Goth. I am not a bit ashamed to say that I own every single one of the Goth Cutie images from TI!! I simply cannot help myself!!

This week I decided to work with Charles' Tulips. I've been wanting to use this image for a while and just needed THE right excuse!! Based on the size of the image I went with a tall card. 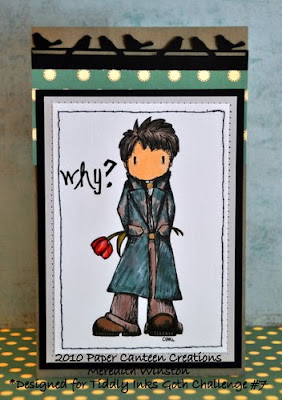 I started by coloring Charles, on PTI pure white cardstock with my Copic markers. I wanted him to be rather subdued so that the single tulip would simply pop with a burst of color. I was drawn to browns, greys, and quiet greens.

After coloring Charles, I matted him on a light grey cardstock followed by black. I stitched on the white with black thread and then paper pierced the grey for some added visual interest. I then added some crackle glaze to the tulip and set it all aside to dry. 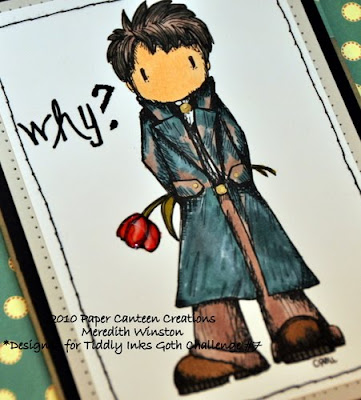 I then looked through my stash and found the teal-ish polka dotted paper that had just a *touch* of red that would pull the color from the tulip. 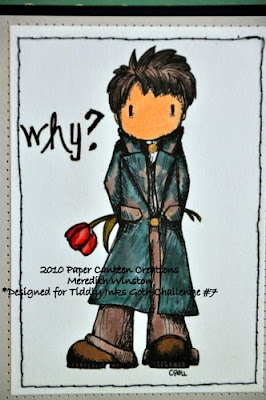 So I layered and I played, not wanting to use TOO much of the DP as I love the crispness of the image and I like it to stand alone. I wanted it to be a little darker, however, so I grabbed my MS border punch and punched out the birds (crows - in my thought for this card) 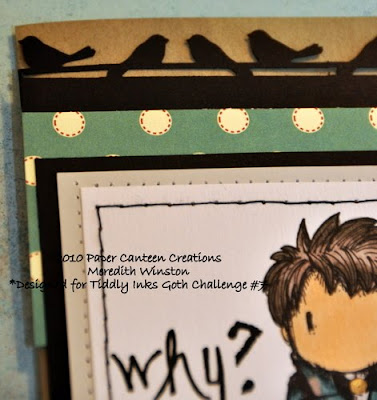 out of black cardstock. It was just the touch I needed to complete this creation. 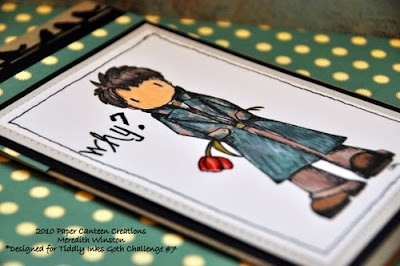 I then sat back and looked. It was missing.....something. A sentiment! I went to my funky rub on letters and added the simple word..."why?".

Yes...that was what it needed. And then I was happy! 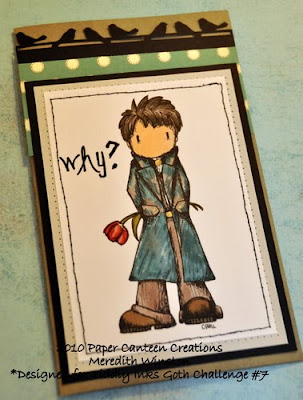 Thank you so much for popping by!!

Come play with us over at the TI challenge blog!!!

This turned out fantastic!

Great card! I love how you colored James The punched line with the birds is perfect! Thanks for joining us at the Tiddly Inks challenge!

Ooh! I love how you colored him! Fantastic work, as usual!!!

You colored James perfectly. I especially love his hair.

It's a great card with the beautifully colored image taking center stage as it should!

And I have my answer. It's a MS border punch. Now I have to find it!

Fabulous Meredith! Just love it. I have a BUNCH of him all colored up, guess I should finish. LOL! He is just so wonderful to color.

I love the colours you chose..your right they just make the tulip pop!!

Thanks for joining us over at Tiddly inks xx

I love this, hun!!! His greatcoat is perfect in teal & I really like how you have the matching paper that just pops out the tulip perfectly!

Thanks for playing along with the Tiddly Inkers this week! I hope to see you again next week!
HUGS!