My husband and I have REALLY been working hard this summer on house projects. We re-did our kitchen and upstairs bathroom and the upstairs hallway. We're working now on the stairwell in our house where we attempted to paint over YEARS of wallpaper with zero success so now we must strip it down and start from the beginning.

Anyway - I won't bore you with our choring but rather show you a cutsie little design element that I've added to our living room!! 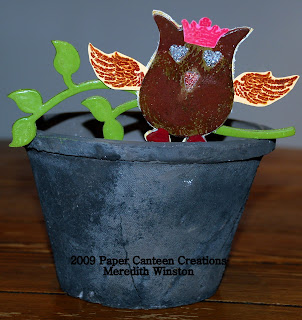 A friend graciously gave us a fantastic kitchen table so our old tiny one has become a "show off" table - as I refer to it in our living room. You know, a place to show off photos, memorabilia, knick-knacks, etc. My hubby and I have been going through really OLD photos and scanning them in. So we now have this fantastic stack of old photos that I didn't just want to put away back in their bins...I wanted to show them off!! So I foraged around for a cool, vintage looking flower pot that had a nice patina to it to place them in. I put them in an arrangement with 2 other bowls. One holding yarn the other holding some sparkly nonsense that just looks cute. But it was lacking something. Something that said... COME AND LOOK AT ME!!!

So I set to work creating a little decoration that would catch people's eye enough to draw them over. 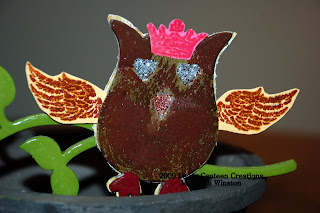 The new chipboard Owl set that I bought from SU! was just the buddy that I needed!!! 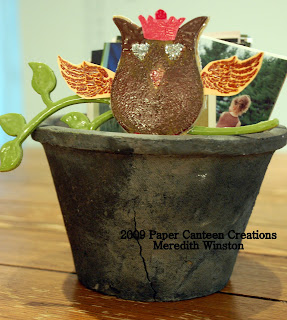 I popped her out of his cardboard slumber and coated him in Olive Green craft ink and heat embossed her. I then covered him AGAIN in Brown craft ink (both Colorbox brand) and heat embossed her again. Before it dried I took my piercing tool and haphazardly drew lines all over her to make her look like she has feathers. I think it *sort of* worked ;)

I sparkled up her eyes and twinkled up her little cute mouth with both silver and pink arts and crafts glitter. She deserved fabulous wings that I stamped using the SU! Wing It set - they were also heat embossed. And of COURSE she needed a fancy crown so I made her one!! Also from the SU! Wing It set. Lastly, she needed her toes painted...of COURSE!! So I dipped her little feet in Raspberry colored craft ink and heat set those as well. They came out extra cute!!!

And then she needed a perch!! Which also, conveniently, came with the chipboard set. I grabbed the vine out of the cardboard set and heavily coated it in a Moss Green craft in and covered it in my extra thick embossing powder and heat set it. It came out exactly as I envisioned it!! 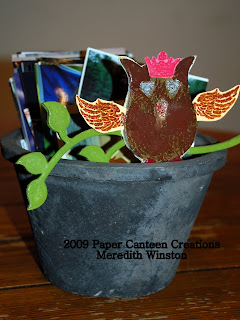 I used my hot glue gun to adhere the two together so that they could perch perfectly on the edge of the vintage pot. 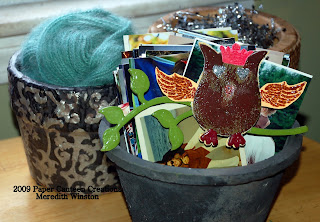 I love how she turned out!!! Thanks as always for reading!!!

Have a GREAT and creative week!!!
xoxoxo