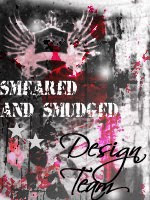 Hello!!! I'm so excited to FINALLY be posting as an OFFICIAL team member of Smeared Ink!!!

Today I am bringing you an altered project made with the super awesome CARNIES set.

I've had my iPhone box in my "alterables" basket in my studio since I got it months ago. Just waiting for the right project to come along. And here it is!! For those of you who are Mothers, and even for those of you who are not, you'll get it. This is my Mommy Complaint Box. There are LOTS of things that we as Mommies could complain about, lack of sleep, lack of free time, lack of quiet, on some days lack of obedience from said little ones, etc. But most of them just come with the territory of having little ones. So complaining constantly does no one any good. So, I've decided that when I'm having one of THOSE days, I will write my complaint down on a scrap of paper and deposit into my newly decorated "complaint box" and let my Carny Friend inside deal with it!! LOL!! 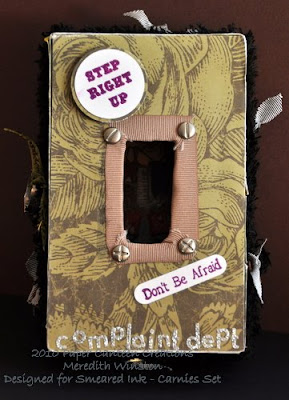 After picking out my papers which are all SU! DP, I then lightly sanded down the iPhone box. I eyeballed about where I wanted the spot for my "complaints" to drop into and I cut it out using my Exacto knife. (I don't measure much unless it's absolutely necessary)

I then ran "red liner" tape around the entire perimeter, top and bottom so that the paper would seriously adhere. After I added my base layers of paper on the cover of the box I then again lightly sanded the papers so that they had a slightly distressed look to them. I covered the slot with ribbon scraps and added screw brads to each corner to make it look more constructed than it really is!! ;) 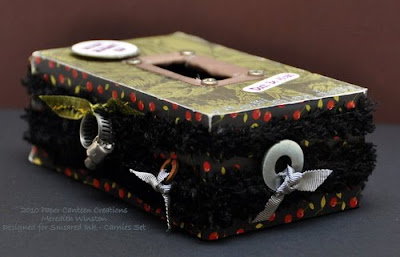 I then pulled out some super cool, black, fuzzy yarn and just wrapped it around a bunch of times and tied it off. I then hit my hubby's tool bench...AGAIN... ;) grabbing a handful of washers and whatnots to tie on with ribbon scraps. 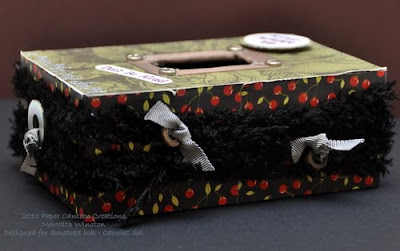 I then decided on my image. I REALLY wanted to work with our desolate looking, accordion playing, cigarette smoking, roughed up gal. She speaks to me...in a certain manner of speaking. lol! 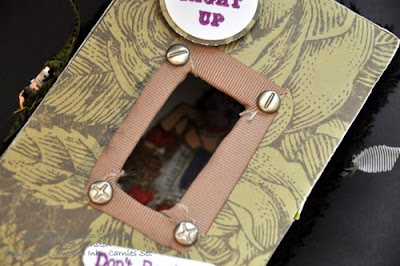 I inked her up in Brilliance Lightening Black and heat embossed her. She is colored with a mix of my Copic markers and Prismacolor pencils (for her face). I added a strip of baby silver beads to adorn her forehead. I then, using matching paper to the cover, matted her and stitched her down to add some dimension. 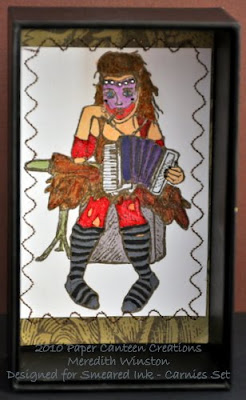 I love that when the box is photographed from the side that it looks a bit...coffin like!!! Not intentional but after I photographed it, that's what I saw!!!

My last touches were my sentiments on the cover of "Step Right Up" and "Don't Be Afraid" both inked in Colorbox Pigment Ink in Eggplant, the first punched out with my SU! circle punches and the second with my SU! word punch. I dug through my sticker stash and came out with the glittery letters to spell 'complaint dept' on the bottom.

I hope you enjoy my altered creation for today!!!

no complaints here!!! that looks so constructed and indestructible, well done!

I adore the hardware you added on! Love, love, love it Meredith! Even more for the additional photos. It looks like it was FUN to create and will be lots of fun to have around.