A Farewell To Our Most Faithful and Fabulous Friend 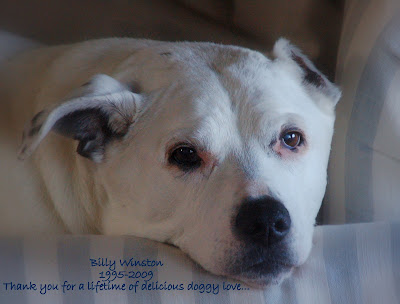 On Thursday night, December 3, 2009 we lost our darling Billy. It was his time, he was in pain...too much pain. And he was a trooper, trying to push through it but in the end 14 and a half years was enough for his body and his mind.
It was February of 1996, my huband and I were not yet married. I had graduated from college the previous spring and we were thick in the stages of planning our wedding. We had discussed getting a dog and definitely one from a shelter since both of us worked in Boston full time it would have been impossible and not fair to have a tiny puppy.

Soon thereafter I was at my college for the weekend visiting girlfriends who were a year behind me. My husband called me on what at the time was my "car phone". You know...the kind that was physically installed in your car? He told me that he was at a shelter near where we lived and that they had an all white (except his spots) dalmatian/pitbull mix. Oh and by the way...he was born deaf. There was not a SECONDS hesitation in my mind and I said "we MUST adopt him". Because honestly, who really wants a deaf half pit/half dal??? Let's be honest, the combo really isn't the BEST mix. But we didn't have children, weren't planning on any at that point, and he was almost a year old. So it was as if the stars and moons aligned with us.

We both took the day off and adpopted him the following Tuesday. We were now proud dog parents!! We took him to Petco, signed him up for obedience classes, bought every toy, treat and food for him. Spoiled rotten I tell you!! =)

He went through 2 apartments with us, our wedding (he wasn't there...heheeh), our move to our house, the birth of our two children, us getting ANOTHER pit puppy (9 weeks old) and COUNTLESS EXPERIENCES in between.....

He ignored our puppy Kate for the first....3 months or so after we got her. He eventually learned to love Kate....and I truly believe that she gave him energy and life in his later years. 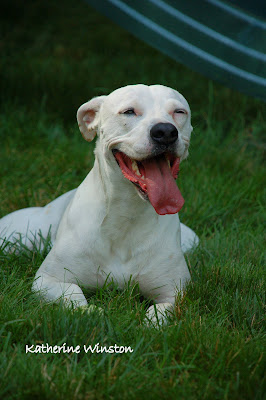 He would try to chase her...play with her and when they'd wake up in the morning she would always pounce on him on his bed and smooch him all over. And he'd give her a few, begrudgingly, yet sweet kisses back.

All those years...and he just rode it all out with us. The good, the GREAT, the bad, the UGLY, and the fabulous. He traveled with us like a champ and loved us unconditionally.

I miss the smell on the top of his head...I miss the way he would only kiss you when HE felt like it...I miss the way every single summer, the SECOND we'd put the sliding screen door in after having it repaired from the summer before would walk literally RIGHT through it within minutes. Every year we figured he'd learn to bark at it to let us know he needed to be let out but he was too smart for that....he created his own doggie door every summer. It was convenient at least as he let himself out into our fenced yard on his own.

I miss every single thing about him...

But he's in Dog Heaven now, eating squirrel shaped biscuits, romping and having fun and sleeping on a fluffy cloud turned inside out every night so that they are THE most comfortable.

These are the thank you notes I will be sending out to those who reached out to us during this most difficult time. 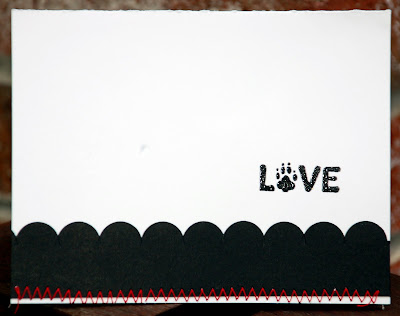 They are all done and ready to go with the exception of the above photo of Billy. I ordered them in wallets from Shutterfly and they should be here any day. The inspiration behind the card was the fact that Billy was primarily Dalmatian in his looks. His face and head were really pitty looking but the rest of him was pure Dal. White with black spots...especially when he was wet....his spots shone right through!! So cute. And after his first collar which was blue we decided that red was his best color so that's what he wore from there on out. It now hangs on our banister...where it will ALWAYS hang. 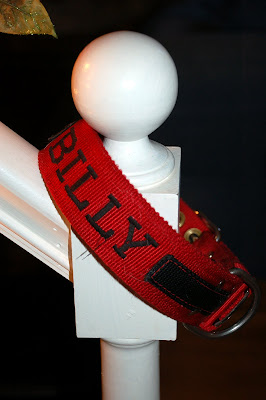 So, I wanted the card to be simple...

White cardstock, black scallop trim to represent his spots and the red stitching to represent his collar. The LOVE stamp is my absolute favorite and certainly appropriate. The inside simply says Thank You. I can't wait until the pictures come so that I can send these out to so many wonderful friends who reached out to us during this most difficult and sad time.
Billy will be in our hearts and in our family forever.

What a touching post! I am so glad that I had the chance to give Billy a hotdog and munchkins...but most of all let him know how much I loved him. I am convinced he heard me that day and I thank you for letting me. We love you Billy, we always will!!!

OMG, I have tears in my eyes from reading this. I know your pain but he will live in your heart forever!

We lost our first dog, Brandy a golden retriever, in October 2006. It was the saddest day of my life. He was my best friend since my hubby worked retail hours for most of Brandy's life. Thankfully, my hubby got me a puppy for Christmas in 2005 so I had Rusty to help me through it. Even today, I still keep a photo of Brandy on my desk at work.

To help us keep Brandy's memory alive, I made my first scrapbook about him that I keep on the coffee table in the living room for all to see. He was truly an amazing dog.

My thoughts are with you and your family with the loss of Billy!

Awwww... Meredith, this is such a touching tribute! What a cute cute cute pup Billie was... he was as lucky to have you as you were him I'm sure :) Hugs... love the cards BTW!

Hi Meredith...I'm all teary eyed now too. Billy sounds like he was such a wonderful loyal pet/family member. You did a great job on your post honouring him. I'm sure Katherine must miss him too.

When I was in college I had 2 cats both were kittens when I got them. (9 months apart) The younger one was hit and killed by a car infront of our house(I think the older one had watched it). She sat on the window ledge for weeks waiting for him to return...it was so heartbreaking to see, you could just see it in her face that she missed him so much. Pets are so truly amazing...they love us unconditionally, We can learn alot from them.
Thinking of you and your family
Kelly

I am so sorry to hear about your loss. I hope the memories you have of Billy will bring you some joy through out the holidays.