Oh do I love me a sketch challenge!!! It's such a nice way to start out a project!!! Always great to have a jumping off point sometimes!!! You should have arrived here from Alex's blog and if not you can start hopping here!!

This week I chose to rotate the sketch so that I was working vertically rather than horizontally. I've been dying to ink up adorable Dino and Gweedo dinosaur set since I purchased it a while ago!! This was the perfect sketch for them!!

My card base and other solid color cardstock is SU! Bashful Blue, Really Rust and Apricot Appeal. I stamped Dino and Gweedo in basic black on the Really Rust paper. I then stamped them again on Basic Grey - Archaic paper and trimmed them out. I used 3-D foam

squares to add them to the Really Rust images below. The double stamping adds nice dimension, I think. 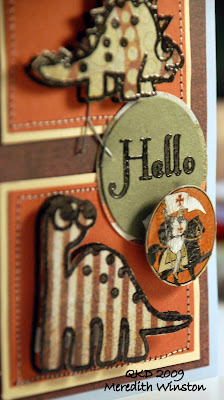 I threw a few staples in for an added texture effect and lastly...I've had this Knight image (FOR MONTHS NOW) which is literally from a box of muffin mix...I think. Or something along those lines. I thought it was a cool image so I trimmed it out saving it for a rainy day (see definition of hoarding) hehehe... I covered him in Crackle Glaze 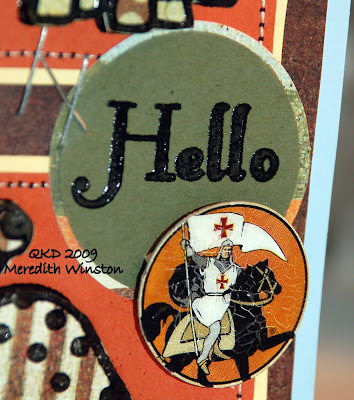 and used him as a cool embellishment considering he matched just about perfectly! 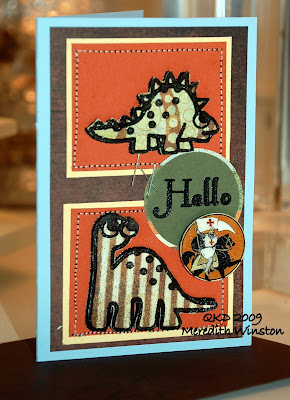 Thanks for visiting!!! Now hop on over to Linda's blog to see how she interpreted this sketch!!!

Adorable images! Great idea to crackle the image cut from a box. We should do that as a challenge--find some packaging to include on a card.

Very nice, I really like all the small details you added

this card made me smile.

I love this card - love all your details.

Your talent wows me everytime. You see things in the most amazing and inspiring ways! I love the dimmension and texture to this card. I just want to touch it!

awww! lol I love the dinosaurs!

Awesome! It is so much fun to stop by at your blog.

Thats neat! I love those dinos

This is SOOO cute! I love those dinos!

this is really gorgeous! great job!

so cool!!! love all the details