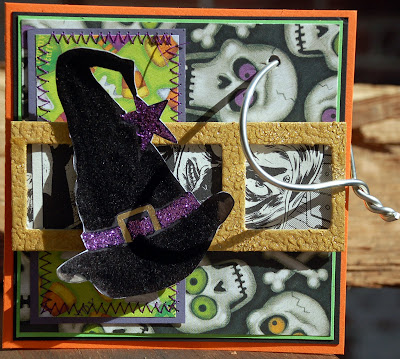 Our challenge was to create a card or project using one of Robyn's Halloween Images!!! We had to use 2 different patterned papers and no ribbon was allowed (yikes!)

I selected the following image from Robyn's Shoppe. I love the witches hat!!! They can be sweet or scary or a bit of both!!! I ALWAYS think of the witch from the Wizard of Oz when I see a witches hat so I was feeling in a relatively 'spooky' mood when I was creating this card. 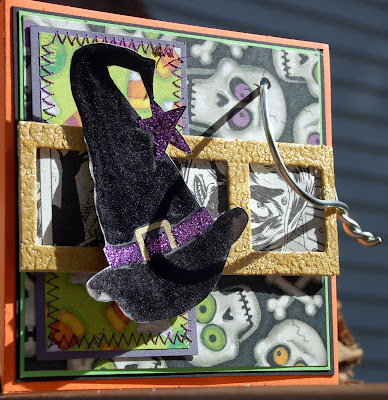 Honestly, it ended up a bit more 'sinister' looking then I had planned but I have learned that, for myself, I let the creative process take me wherever it goes. I don't try to force it, I don't try to sway it. If I'm not "feelin' it" I take a step back and work on something else. Or I stop entirely and come back later. But this one took on a life of it's own.

I knew the 'no ribbon' rule was in effect. So I kept that in mind.

I started with a 5.5 x 5.5 card and pulled out the skull and candy paper from my stash. Both are Bo Bunny I believe.

I matted them with various SU! papers and I stitched the candy DP for some added dimension. Earlier in the day I had colored the hat with my black Copic marker, a purple Copic Marker and my gold paint pen. I then glittered up the purple band and star and used black velvet flock - 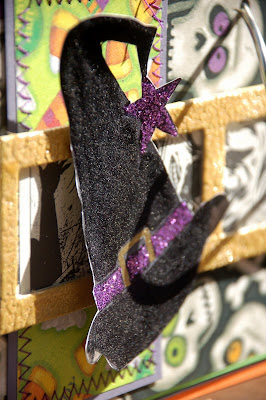 Doodlebug Designs Inc brand to really give the hat some life. I'm always about texture.

And that's where I got stuck. So...I sat. And I sat some more. And then...a little more. And then I started to rifle through my various bins, baskets, and drawers and I pulled out a raw chipboard piece that was a cast off from other chipboard pieces being punched out of it. It reminded me of a comic book strip. Which then brought me to this book that my brother in law just bought me. SUPER creepy, VERY scary, HAUNTINGLY vivid images but SO great for THE right project!! Whether its for Halloween or someone you know that's into graphic novels...either way. He purchased it first and when I saw it I knew I needed my own copy to use in projects!!!

So...I took the chipboard "comic book strip" and coated it in my Brilliance Pearlescent Gold Pigment ink pad, covered it in heavy embossing powder and heat set it. I love how it looks like it's just been rained on!! 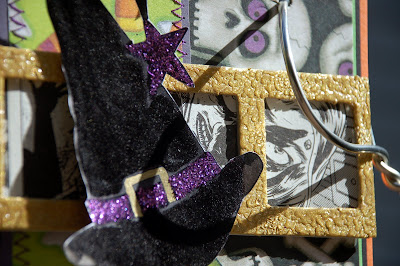 I went through 'the book' to find an image that fit well inside. The one I chose super creeps me out but I LOVE the subtle effect it has on the card!! You 'almost' don't notice the 'sinisterness' that it brings to the card until after it hits you! 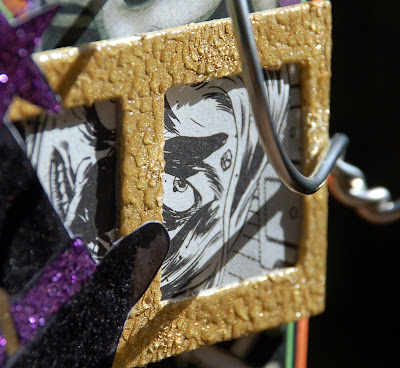 From there everything else clicked in terms of placement. I adhered everything down and then needed one last touch. Since we couldn't use ribbon (which wouldn't have worked on this card now anyways! I used some soldering wire that I snagged from my hubby's workbench. I punched a hole through the card and created a loop or a handle of sorts to just dangle. I think the effect worked nicely!! 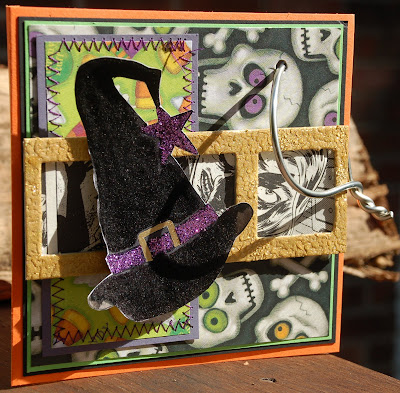 I truly love how this came out and I hope you do too!!!

This turned out sooo cute! I had such a hard time with this one, the whole no ribbon thing drove me crazy!