Welcome to another week of Robyn's Fetish Challenge !!! This week we were given a 'recipe' to follow.
Here's the recipe:
Sounds yummy, right??

Ok so here's what I cooked up! 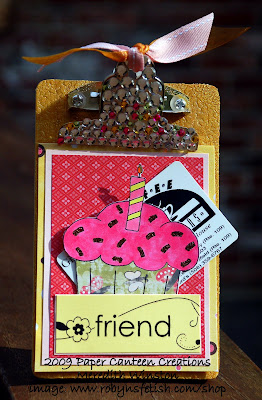 I started with an unfinished, wooden clipboard that I picked up at ACM some months ago. They're cheap to begin with but I think they were on sale so I grabbed a bunch. Always a good 'go to' when you need something different.

I first grabbed some twisties (you know...the things you use to tie up your garbage) and I opened the clip. I then used my Brilliance Pearlescent Gold pigment ink pad to "paint" the front of the clipboard with.

I basically pressed the ink pad into the wood and schmooshed it all around so it was really 'inky'. I then used my super thick embossing powder and covered the wet ink. I used my heat gun and set the embossing powder. 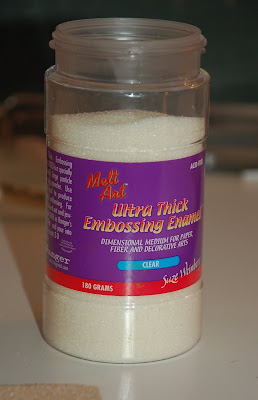 For my 'bling' I figured I'd go ALL OUT! I grabbed my sheets of rhinestones and went at the clip part!!! It took a while but with a little patience and some crafting tweezers I got the job done!! It's SO super blingified!! hahahhaah! 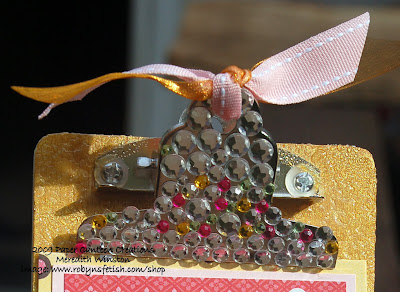 I chose Robyn's cupcake image (I love anything cupcakes!!) and set to coloring it. I also decided to paper piece the cupcake liner. So I trimmed out some 12"x12" DP (with the cute pink butterflies on it) down to 8.5" x 11" and ran it through my printer printing the cupcake again. I trimmed out the cupcake liner and adhered it to the image already printed on white cardstock. 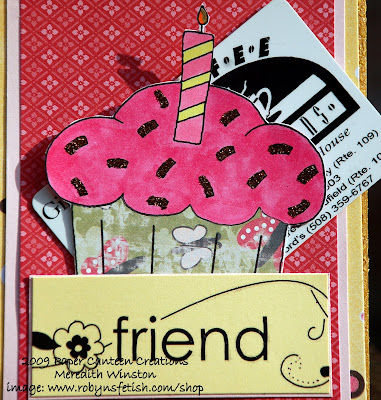 I then used my Copics to color the frosting, candle and sprinkles!! After coloring the sprinkles I used my glue pen to coat them up and then covered them in chocolate brown glitter. SO FUN!!

I then trimmed the entire thing out and set that aside. I wanted to do a simple matte for the cupcake seeing as there was already A LOT going on so I used a pretty yellow polka dotted DP for my first layer, PTI's Blush Blossom as my next layer and some pinky SU! DP as my third layer. 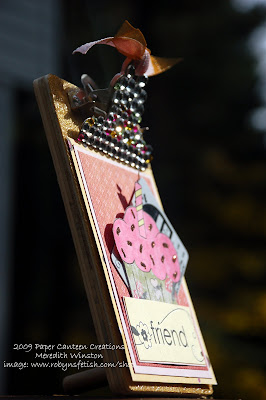 I used PTI light yellow (forget the actual name) for the bottom 'pocket'. I matted it in the same Blush Blossom but just ever so slightly to give it a bit more dimension. I used some SU! rub ons for the 'friend' sentiment and since there was a flower right next to the word that covers my flower part! ;) 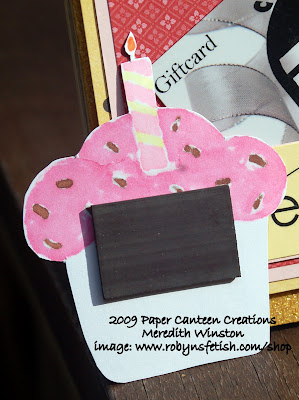 so that the recipient can put it on their fridge or wherever and a gift card to a local coffee shop!

The matte paper is detachable 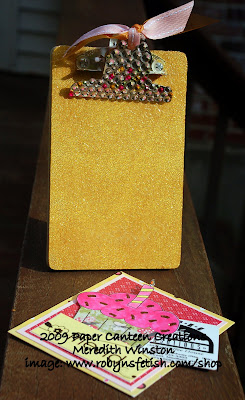 so that the clipboard can be used on a kitchen counter to hold a pad of paper, on someone's desk to hold post-it notes, etc, etc. I wanted it to be beautiful AND practical!!

The last bit was to add my ribbon. And I will admit that I cheated...JUST a little!!! I used 2 ribbons instead of one ;) One just wasn't doing it for me!! LOL!

love your clipboard !!! what a great idea, hugs W

What a fantastic creation and a fab idea. Love all the jewels.