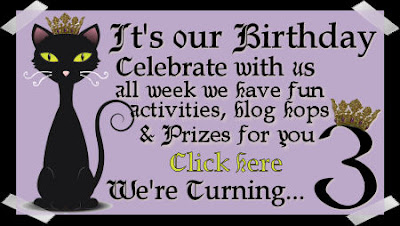 HOP HOP HOP!!!
Before I even get started, if you are here simply visiting then WELCOME!! But you'll want to start at the beginning of this amazing journey with the AMAZING ALEX to see everyone's newest and most fabulous creations from the very start!!!
This is a VERY fantastic and important hop indeed!!! I feel so excited to be here with QKD during this very special day!! It's QUEEN KAT DESIGNS STAMP COMPANY'S 3RD ANNIVERSARY!!! Queen Kat aka Vicki Douglas has LITERALLY poured her heart and soul into this company and it shows with her quality and care for each and every product, customer, and design team member.

AND AND AND!!! We have another NEW stamp designer to introduce you to!!! Her name is Kelly Kost and her designs are new and fabulous!!! Nothing like I've ever had access too before.

I have 2 creations to show you today!!!

My first creation is an accordion photo album with coordinating display box that I will use to put some of my favorite fall and Halloween pictures in when they arrive from Shutterfly.

I've ALWAYS been a HUGE fan of The Wizard Of Oz. I have vivid memories of the days when it used to be on once a year...I think it was in February or March. My Mom would pop Jiffy Pop and I'd stay up WAY past my bed time, be PETRIFIED of the witch and flying monkeys and not sleep a wink because of them but it was ALWAYS a magical night!!!

So when the Kelly's new stamps were released to us I KNEW exactly which stamp to request!! And believe me...I had a BALL with this one!!! 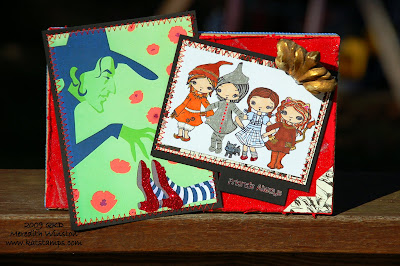 I started with the stamped image. I stamped the image in SU! Grey Ink. I then set to VERY carefully coloring with a combination of my Copics and metallic paint pens. I paid fine attention to the details on each character. Lion has sparkly ears, Dorothy has sparkly socks and of COURSE the Ruby Slippers, Toto is colored and heat embossed, The Tin "Girl" has beautiful streaks of silver in her hair and Scarecrow has pretty sparkly bloomers and belt along with gold toed slippers!! I left a 'tab' of sorts to stamp the "Friends Always" sentiment that comes with the set. They need each other as friends with The Wicked Witch coming after them!! =) 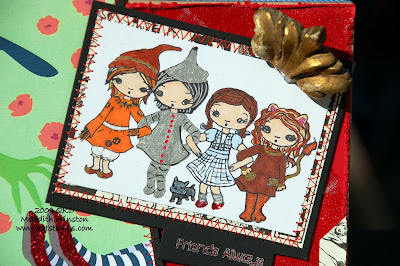 Next I matted the image onto some creepy comic book paper from a book that my Brother In Law gave me knowing that I could use in my creations. It's a book about Grimm's "Fairy Tales" but done in comic book fashion and done VERY SCARILY!! But it makes great background paper!!! I then matted that onto a slice of SU! black cardstock and stitched it down with red thread.

The next image I worked on was the Wicked Witch!!! It's a journal that I have that I scanned in and scaled down to work with my project. I used my fine tipped glue pen to glue up The Ruby Slippers and sparkle the heck out of them!! I matted this onto another piece of black cardstock and did the same stitching. 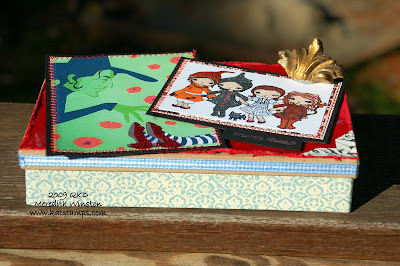 The background paper for the top of the box is PTI Pure Poppy. I distressed the edges and then super inked it up with my Versamark Dazzle Pad and then heat embossed it. After I added my 2 panels I then added a photo corner using my SU! photo corner punch (using the comic book paper) and a piece of a French Provincial mirror that I have that broke off years ago. It was just the right 'piece' to add a bit of...old fashioned touch. Considering the movie is 70 years old!! 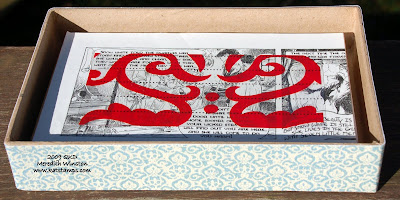 I trimmed the outside edge of the box top in blue and whit gingham print ribbon - a la Dorothy's dress. The outside of the bottom box is in a blue and cream psuedo-Baroque paper that accents the gingham ribbon. Inside I covered and decorated the front and back of each accordion panel with first the comic book paper and then accents on each page awaiting their designated photos.

====================================
My second creation is a tag or could be used as an oversized card as the back is completely blank! I used my Cricut and cut a 7" circle with matching insert out of bright yellow paper and white for the insert. For the outside layer I rubbed an emeraldish green pigment ink pad around the edges and heat embossed it. I then used Aleene's Tacky Glue and rolled the edges through the glue and then through my vintage real glass emerald glitter. (you see the theme I'm rolling with ;) 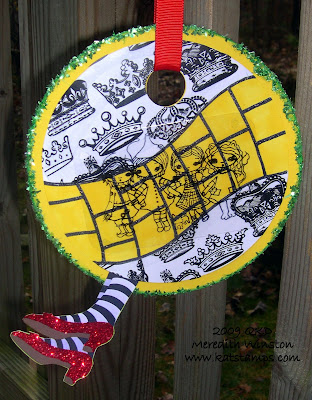 I set that aside to dry and set to work on the insert. I free hand drew the Yellow Brick Road, used a sharpie so it wouldn't bleed and colored the inside yellow with one of my Pantone markers. I then went over the lines of the brick road with my Versamark pen, sprinkled with embossing powder and heat set. 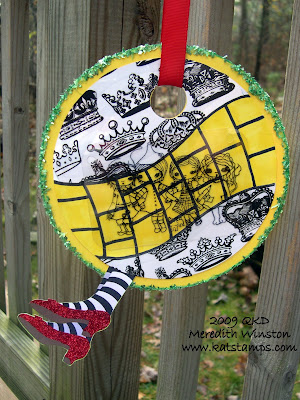 I wasn't sure what to do with the extra white space because between the road and the copious amounts of glitter there was already a lot going on. So I used some of my acetate paper and trimmed it up to fit the space and adhered it down. I then couldn't decide how to add the fabulous foursome to the image. I wanted something different than just coloring them like I did in the photo box so I decided to go with clear acetate and my black Staz-on ink. I corner rounded the edges and place them on the yellow brick road so they would show up nicely. 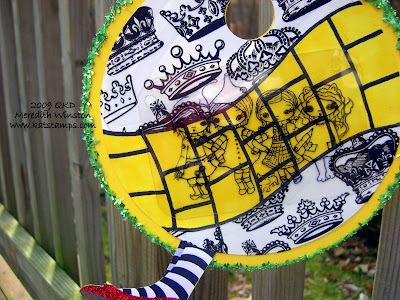 I added a bright red ribbon to hang it by and the last touch was the witches feet with the ruby slippers and all sticking out from underneath the creation!

I hope you've enjoyed my creations!!

Next on this amazing hop list is our very magnificent Penny!!

I've included the entire hop list in case you get lost along the way!!

Thanks so much for visiting and hopping with us on this very special occasion!!

Wowwie Meredith, your creations are stunning, so cool what you made!

You're right Meredith, great minds think alike! :) Love your book,so cute! That paper from a book is fab!

My name is Wynneth said...

Absolutely stinkin' marvelous!! I just really adore both projects!! Such wonderful ideas and the cutest supplies to make them happen!! =)

OH MY!! You did such an awesome job with your creations!! I mean just AWE-SOME

Holy smokes Mer! you went to TOWN wit this one! Beautiful work!
We owned The Wizard of Oz on Beta Max! lol SO I'd watch it all the time. I've since been able to snag a version on DVD. It's my favorite (up there with Alice in Wonderland!). The Wizard of Oz and a bowl of Count Chocula is the perfect remedy for a broken heart! You CAN'T be sad after!

Totally amazing! I read through the entire post to savor every fine detail of your creations! And the witch's feet with the ruby slippers were just too much--I have to get those. Your really did this stamp up right!

AMAZING!! I just love that paper with the wicked witch!! and the ruby slippers!! FANTASTIC!!

so cute! love them!

I am in shock, the things you have done with this stamp amaze me. I cannot believe as I hop around the site all the great creations. I feel so honored. Thanks so much!xo

There are all so amazing, you really rocked these Meredith.

Meredith- you are SO creative! I love the way your mind works and absolutely ADORE the legs on these, LOL!

how cute!! I need those feet.